The Hotel Casa Hintze Ribeiro is a charming hotel, located on the island of São Miguel (Azores), in one of the main arteries of the historic center of the city of Ponta Delgada.

Inspired by some of the most prominent figures in the history of São Miguel, this hotel pays a sincere tribute to the region's culture, society and heritage.

The name of the Azorean politician Hintze Ribeiro , who was born in the city of Ponta Delgada, on the 7th of November 1849, is particularly important, since this hotel is located precisely on the street where Hintze Ribeiro was born, having, for this reason, renamed “Rua Hintze Ribeiro”.

Other names in the society of São Miguel take on particular importance in this unit of charm, as the great poet and writer Antero de Quental and the poetess Natália Correia, both born in the city of Ponta Delgada, provide us with some of the his most beautiful poems, giving the space an emotional added value that elevates us to other dimensions.

The main characteristics of the Azorean nature are also part of the concept developed in terms of the interiors of this hotel, with emphasis on the velvety green of the Azorean pastures, maintained and cared for by a fatuous rain, so constant in the Azores, which gives these islands a of unique natural beauty.

Finally, the Hotel Casa Hintze Ribeiro, a faithful “mirror” of the Azorean soul, could not fail to highlight the symbolic colors of the Azores: blue and white, which give color to various details and details spread throughout the unit, also valuing the traditional Azorean tiles, present in several exclusive corners in this very unique, personalized and unique hotel.

Interior design by Nini Andrade Silva. Quality and comfort, combining the feeling of "home-feeling" in the Azores
View more
Link 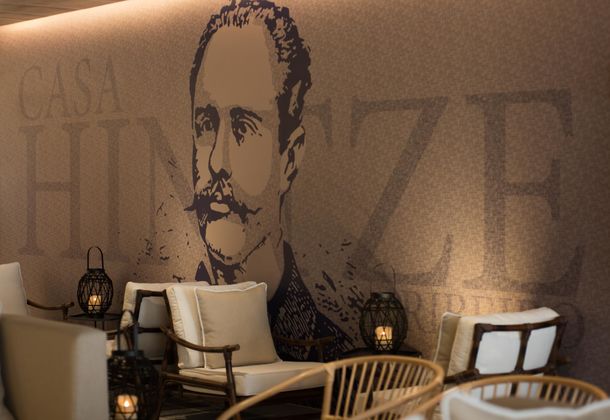 On the island of São Miguel (Azores), in one of the main arteries of the historic center of the city of Ponta Delgada.
View more